The health and safety of our staff, customers, and community is our top priority. Read an important message from Toyota of Grand Rapids.
Home
/
Used
/
BMW
/
X4
/
xDrive28i

VERY CLEAN!!! AWD ONLY 39,000 MILES!!!. Black Sapphire Metallic 2015 BMW X4 xDrive28i AWD 8-Speed Sport Automatic with Shift Paddles 2.0L I4 TwinPower Turbo Odometer is 37698 miles below market average! 20/28 City/Highway MPG This vehicle comes with a 3 month / 3,000 mile powertrain warranty! Reviews: * The X4 is somewhere between a station wagon and an SUV. It has all-wheel drive for all-season confidence, yet handles more like a car. The 2015 BMW X4 would catch the eye of someone who wants something sportier than an SUV, but still needs cargo space. Source: KBB.com * Distinctive design; powerful and fuel-efficient engines; comfortable ride; solid construction. Source: Edmunds * The all-new BMW X4 makes a statement - and it's one that's certainly not quiet. A muscular yet elegant face, sweeping roofline and dynamic profile give the X4 unmistakable presence. Its stance, higher than conventional coupes, supports greater visibility and all-road capability. Once you take the wheel, the interior boasts style that's athletic and luxurious. Comfort Access allows the you to open vehicle doors and start the engine without ever having to use the actual car key. As long as the key is on the driver, Comfort Access detects when you are approaching—unlocking the doors and allowing you to start the engine with the Start/Stop Button. Even with such bold style, functionality is still not lost. In fact, the 40/20/40 split-folding seats allows the X4 to transform to increase storage capacity. When the rear seat is folded, capacity jumps from 17.7 cubic feet all the way to an impressive 49.4 cubic feet. The new iDrive 4.2 navigation system showcases an optimized menu with state-of-the-art technologies, like Advanced Real-Time Traffic data. Sixteen finely tuned speakers, including seven mid-range, seven tweeters and two center bass speakers, produce brilliant sounding acoustics. With 240hp, this state-of-the-art TwinPower Turbo engine features High Precision Direct Injection and Valvetronic technology. Opt for the M4 xDrive35i model and boost to 300hp. The 8-speed sport STEPTRONIC automatic transmission gives a more “hands-on” experience with paddle shifters on the steering wheel that allow them to manually change gears. BMW's exclusive Active Driving Assistant system consists of multiple features – Lane Departure Warning, Frontal Collision Warning, City Collision Mitigation, and Pedestrian Warning. Source: The Manufacturer Summary

Model Overview
The BMW X4 comes in two basic guises: X4 xDrive28i and X4 xDrive35i. The xDrive28i is powered by a turbocharged 2.0L 4-cylinder engine that produces 240 hp, while the xDrive35i utilizes a twin turbocharged 3.0L 6-cylinder engine producing 300 hp. In both cases, power is sent to all four wheels via an 8-speed automatic transmission.
The X4 further sets its self apart from the X3 with a unique interior featuring very nice materials and high quality construction throughout. The ride height is lower than in the X3 and it offers drivers a more classically coupe-like view throughout the greenhouse. Handling has been improved over the X3 as well, with the X4 doing a passable impersonation of a sports car on winding roads, thanks to a lower ride height and more aggressively tuned suspension.

There are two optional packages available on both xDrive28i and xDrive35i models, dubbed M Sport and xLine. Both packages significantly change the exterior of the X4, with the M Sport line deleting various chrome bits and adding more aggressive, body colored exterior enhancements. The M Sport line also includes unique 19-inch wheels and a few interior styling tweaks. The xLine takes the standard X4 in the opposite direction, adding rugged looking exterior enhancements as well as its own set of 19-inch wheels.

Safety is enhanced by a full complement of electronic aids as well as by several airbags. Other safety features include a hill start function as well as a mode for descending slippery slopes. 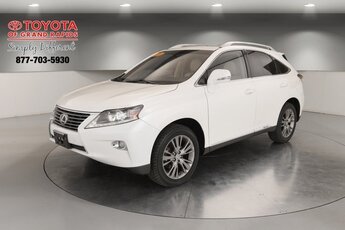